Lockdown wildlife under a lens 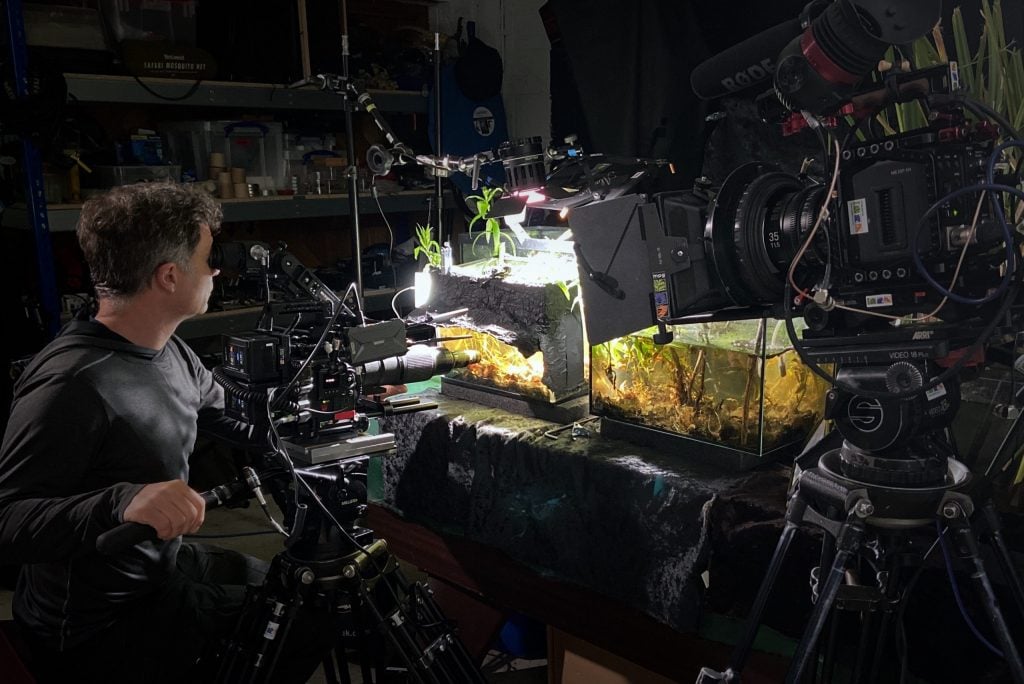 As a wildlife cameraman, there’s no escaping it requires a lot of travelling, searching for exotic and unusual animal stories to film, for the most iconic wildlife TV series. These include Attenborough’s Life of Birds, Life of Mammals, Blue Planet, Planet Earth, Life Stories and recently Seven Worlds One Planet. Over the years and decades this has become a relentless pattern of travel, filming, returning home and flying away again, sometimes with only a few days between each trip.

As glamorous and lucky as this seems, to follow a childhood dream to travel and film wildlife in locations, I could only have imagined when I was very young, like any job over time, it can start to feel like living on a treadmill that occasionally you wish would pause long enough to recharge, rest and reflect.

Resting and recharging has been hard to achieve in the freelance world but this was forced upon me as the world shut down. I should have been preparing for a trip to the Sonoran desert in Arizona, as lockdown took hold, to film animals with extreme adaptations to life on the edge. Instead I found myself filming the contents of a bucket of ditch water, in a small tank in my macro studio for a five-minute Springwatch tadpole film, amongst other stories. This couldn’t have felt more unglamorous, but I felt lucky to have any work at all. Out of adversity, new inspiration and opportunities can present themselves in ways not immediately obvious

Springwatch was deemed critical broadcasting being one of the few productions that could be produced safely under social distancing guidelines.  All it needed was wildlife filmmakers with kit, and safe access to the outdoors to find good animal stories. I was fortunate to be one of those living in the countryside, who could not only do this but had the resources to make films at home alone. So despite feeling the freelance fear with big contracts abroad cancelled in quick succession, feeling as if there was literally no tomorrow, I began a different kind of journey exploring a hidden world right outside my door.

As the days became weeks and weeks turned into months, this journey couldn’t have been more remarkable. I forgot the big ‘outside’ world and became totally immersed in a tiny world I had created in a small fish tank from a bucket of ‘wild’ water. I witnessed one of nature’s most overlooked and astonishing feats, that of metamorphosis as tadpoles and nymphs were transformed, like butterflies, into entirely different looking creatures.

Despite living in the countryside, in the ‘old world’ the distant rumble of human activity was always omnipresent. A persistent white noise that we’ve all become numb too and hardly notice. From cars on the M5 over five miles away to the drone of planes routinely flying in and out of the UK, it was always there.

But what struck me one evening during lockdown, while watching a stunning crescent moon setting over some trees, was the absolute silence that pierced my senses! The tranquility was breath taking. There were no cars, no planes, and no distant rumble of any human activity. For a moment it felt like I had been transported to a remote part of the world, there were just natural sounds. But I was at home. It was a little eerie yet wonderful and calming at the same time. Humanity’s rat race had stopped.

I could hear the natural world like never before. The natural world could hear itself. So many barn owls and tawny owls were calling back and forth to each other. Most bizarrely of all, I heard the very faint yet unmistakable call of a cuckoo, at midnight. He must have been at least half a mile away. For once the rumble of cars wasn’t drowning his calls out. For over 30 minutes I took in this priceless moment as his calls echoed over a starry Somerset landscape.

Back in the studio to film the tadpoles, and nymphs, connected me back to a world of nets, jam jars, and pond water. It brought back those childhood memories, ‘fishing’ in streams with a sense of wonder, of strange and curious creatures, which left me transfixed and wanting to learn and understand so much about the natural world. And yet it was a world I’d barely touched the surface of, until now. Obviously, I didn’t have the tools to explore such small creatures as I do now but regardless, little had prepared me for what I was to discover over the coming weeks.

Looking down from a human level all small living things look characterless and insignificant. A

Tadpole is just a black ‘squishy’ thing with a tail, a dragonfly nymph a boring dull looking ‘bug’. Little could be further from the truth when you get in really close. What struck me was how tadpoles are in a constant state of flux and full of character. There was a real sense of urgency about them, always busy and rushing to eat what ever they could. It was a race to survive this transient phase and become fully grown frogs.

From the outside they always look the same to us, but viewed through a macro lens from the moment the round black ball inside frogspawn unravels into an embryonic form they continually transform. They emerge with large feathery gills, no face to speak of and a body shape unrecognisable from what it’ll become in a few days.

In this time it takes on the typical oval shape of a tadpole but is still colourless and insignificant. After a week of further growth, tiny specks of glittery gold patterns appear in the skin. After two weeks, it has covered their whole bodies and looked stunning through my macro lenses. Even their eyelids had glittery eye shadow to enhance their look.

This seemed to be the pigment developing that would give them their true colour we see as frogs. But even then from a human point of view they still looked black. Nothing about a tadpole is boring or uninteresting when not seen from a human perspective. At almost microscopic levels a tadpole mouth has five pairs of ‘lips’ each, with a row of barbs they use to scrape decaying matter from vegetation that came from the ditch.

Stubby little features appearing from within the base of their tails grew rapidly into back legs taking on an almost human hand shape. Their skin was transparent revealing internal organs but what I couldn’t see was any sign of front legs. These seemed to just magically appear. Until, I spotted one through my lens swimming with three legs. They were developing internally; invisible to my lens they popped out through redundant gills at their side when ready, but not always in sync with each other.

It wasn’t long after this the transformation was complete. The long tails would disappear almost overnight, absorbed into their bodies and their round heads rapidly morphed into the contoured shape of a fully developed but miniature frog.

Equally engaging was all the other water creatures that came with the tadpoles in their ditch water. Hundreds of tiny feathery gilled, flapping water fleas and water louse were sharing this little universe. It didn’t seem possible I had scooped all these up as well with the frogspawn. How could there be so much life in such an insignificant looking ditch? It was remarkable to know life is everywhere. These provided the food for the dragonfly nymphs I was also filming alongside the tadpoles in a separate habitat I’d created.

Through the lens the nymphs moved with a biomechanical manner and menacing purpose. Their articulated legs and an ‘exhaust’ at the rear used for breathing and propulsion had a look of a sci-fi creation…the Martian machines in War of the Worlds and the xenomorph in Alien came to mind. In super close up, with head filling frame they look ferocious, extendable, hydraulic jaws, huge pincers and giant bug eyes were perfectly adapted for striking and catching prey. It looked enormous and frightening to me, but I’d forget how insignificant they looked once I took my eye away from the camera, and looked with bare eyes at this tiny inch long creature.

The calm of nature

Managing the care of these tiny life forms required regular trips across a field, that was turning into a lush meadow full of tall grasses and flowers, with bucket and net in hand to collect more food and fresh ditch water. This brought me closer to the rise of spring and an awareness we were living in very different times. The human silence was full of rich competitive bird song as the breeding season was starting up along with a reassuring buzz of insect life.

The tranquility and calm transported me right back to that sense of wonder I had in my childhood days. This was where my interest in all creatures’ great, but especially small, was inspired and nurtured. Butterflies were a particular passion. As quite an anxious child I took solace in the natural world as a source of calm and reassurance along with a hunger to learn and understand as much as I could about the wildlife around me. I would lose myself catching butterflies and bird watching, which in turn grew into a passion for photographing anything that moved. It provided such a valuable feeling of wellbeing I didn’t appreciate then. For me it just felt normal.

As the weeks passed by the meadow I walked through was bursting into life in a way I had rarely seen when home, although I was often away at this time of year, there did seem to be so much more around. Whether real or just imagined more and more of us were noticing and appreciating wildlife being allowed to breathe and thrive without fear of humans during lockdown.

It was amazing to know people were pausing to listen and watch what we’re all guilty of taking for granted for far too long. The prolonged spell of dry, warm weather had brought out clouds of butterflies in numbers I’ve only seen before in jungles. Not only was this great for the senses but also reassuring to see an abundance of pollinators out there. This is the glue that binds all life together. Lose them and everything will become unstuck and fall apart at our peril.

Return to the wild

As I released into the wild, the froglets and fully formed dragonflies, that had successfully finished the race to complete their transformation, it felt a little ironic that I didn’t have to travel half way around the world to experience some of the most remarkable wildlife stories. Many are here right under our feet.

I hope humanity will use all that we have learnt during lockdown to restart life in a more sustainable and careful manner; the benefits are enormous and far-reaching, if we don’t we will end up slipping back into the old ways of aggressive consumption and all that goes with it.

The most positive and reassuring thing is how the natural world can heal itself in a relatively short space in time. The future of our wellbeing depends on it.