In Mark’s third stargazing blog he considers the wandering planets.

In contrast to needing patience watching shooting stars, which appear and disappear at random, in the blink of an eye, observing planets is the complete opposite.

Most are bright and easy to spot once you know where to look and they barely move from night to night. This makes them simple to watch, wandering slowly across the sky over time. A key tip to finding planets is that they do not twinkle like stars. Their apparent size in our sky means our atmosphere doesn’t distort the light from them unless very close to the horizon, like it does with tiny points of starlight.

As luck would have it no less than five planets are in the sky after dark over the next few months as they happen to be on the same side of the sun as Earth. Four of them don’t need special equipment and three can be easily seen with the naked eye, they’re super bright and some of the most iconic ones to observe. Only Venus and Mercury are left out of this parade of worlds. Binoculars will make viewing more interesting but not necessary if you just want to identify the main planets with the naked eye 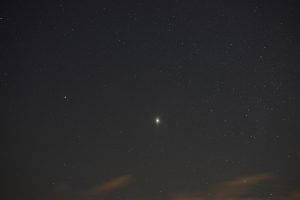 In October the first planets to appear as darkness falls are the gas giants Jupiter and Saturn. They are unmistakable being close together low in the sky in the south west. You cannot miss Jupiter, the brightest star in that area of sky and Saturn is easy to spot just to the east (left) of the two but less than half as bright.

Through 10x binoculars you will be able to make out Saturn’s elongated shape, the rings just beyond visibility and Jupiter’s four big moons will pop into view. These are on a constant merry go round as they orbit around the planet. Some nights you may only see two or three moons as they hide behind or in front of Jupiter itself.

Keep an eye on these two giant planets as over the coming weeks you will notice how the gap between them is shrinking. In fact come the 21st December they will look like they are physically going touch from our vantage point. This is due to a rare alignment, once in 397 year event as Earth, Saturn and Jupiter all line up. Through a telescope for the first time in centuries you will be able to marvel at both planets in the same field of view. It’ll truly be an iconic celestial moment!

Moving further east spot the brightest ‘star’ in our autumn skies. With an orange tint this is Mars and in October, rises at sunset. As it climbs higher it’ll be easy to identify. Its brightness is temporary as this month Mars is at its closest to Earth for the first time in two years. Over the next few months though it will noticeably fade to obscurity amongst the background stars as Earth speeds away in its orbit, so catch it while you can.

Make a note to view it week to week if clear skies allow and you’ll see it noticeably fade. Mars will look like a small disc though binoculars and doesn’t offer much compared to the gas giants. But you are looking at the only planet that you can see its physical surface. A small telescope will show dark and light geology and polar ice caps giving a very barren Earth like appearance. 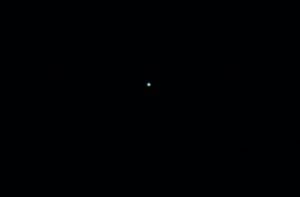 Now Uranus requires some skill to find. But it’s just within naked eye reach if you have good vision. But you need dark unpolluted skies away from city lights and to know where to look.

You’ll need a star map app and ideally binoculars to succeed. It lies not too far east of Mars and has a pale blue-green appearance but at this a distance of 2.8 billion km it’s subtle!

At the furthest reaches of the solar system Neptune is even further out than Uranus at 4.3 billion km! In the sky it lies between Mars and Saturn but this does require optical aid and precision to identify from a star map. Like Uranus it has a pale blue appearance but this will be hard to discern.