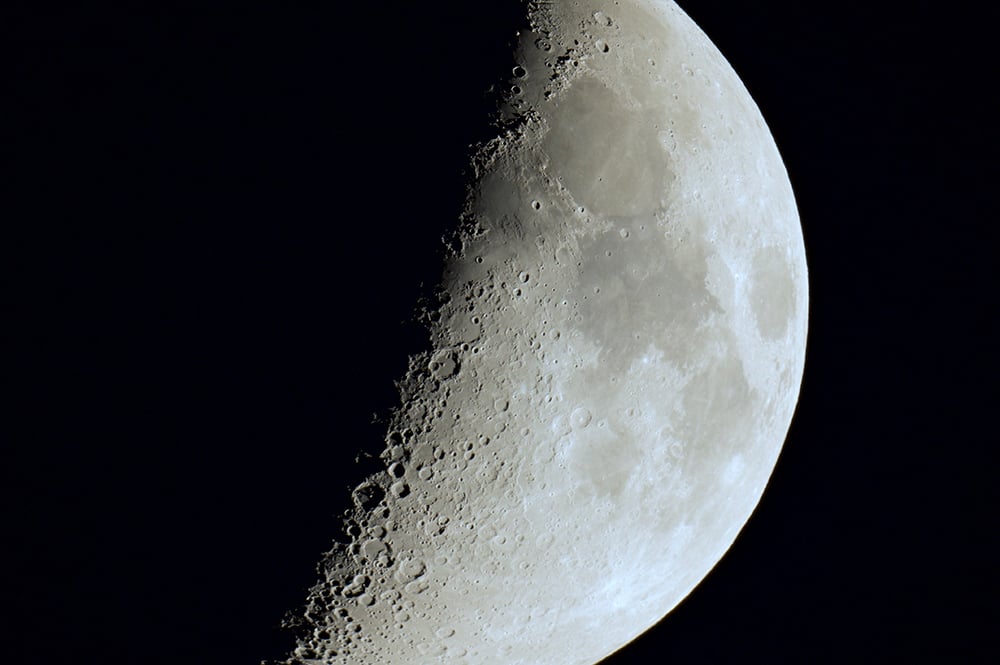 In Mark’s final blog of the series he looks at the moon during the winter and some well known stars.

In the late autumn and winter months the full moon spends the longest time at night above the horizon than at any other time of year. It has to be the first object in space we connect with as a child with its proximity to Earth having a powerful influence on all of us.

You don’t need much to see it in detail. Even a pair of binoculars will reveal its character revealing the larger craters and mountain chains. A telescope will immerse you in the mysteries of its surface in stunning detail. The best time to do this is at any time other than when full as the surface features only show up when there’s shadows. These disappear when the moon is fully illuminated.

There are two full moons at the beginning and end of October. On the 31st it’s referred to as the harvest moon and also mistakenly a blue moon. It’s not blue and never will be! It’s just a phrase coined a long time ago by the media, the real explanation of a blue moon is far more complicated than simply when you have two full moons in a calendar month which are common. What’s more interesting to the eye occurs after sunset on the 19th November when a nearly crescent moon sits beautifully between Saturn and Jupiter, so will make it really easy to identify these two planets.

A sky full of stars

Where as our solar system is dynamic and always changing whether it’s comets, shooting stars or wondering planets the stars in the milky way are perhaps the one thing that always appear to be constant. Although they are moving at great speeds relative to us and each other the distances involved are vast and incomprehensible making any movement imperceptible in our tiny lifetime. However, with the changing seasons we do see the constellations coming and going as we orbit our sun, so the patterns of stars change month to month regardless. 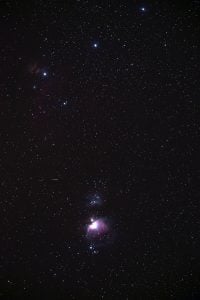 Autumn in to winter provides a rich array of constellations to explore, from Orion to Pegasus they are perhaps the most recognisable. Orion is low down in the east at 9pm in mid November. It has to be my favourite for the dominance of its member stars. It’s also a constellation whose shape bears a good resemblance to the mythical hunter figure it’s supposed to represent.

Its three main stars making up the belt are so obvious with the ‘sword’ below made up of a cluster of faint stars and a diffuse nebula called M42. It hides a stellar nursery containing hundreds of ‘new’ born stars. Orion also contains two stand out beautiful stars, Betelgeuse and Rigel.

Betelgeuse, the ninth brightest star, sits in Orion’s right shoulder and is a red super giant which if it were at the centre of our solar system instead of the sun, would engulf all the planets up to Mars and beyond, half way to Jupiter! It’s also at the end of its life and is predicted to explode in a super nova any day in the next 1,000 years. When it does so it will outshine the moon!

Sitting below Betelgeuse in the left foot of Orion is the seventh brightest star, Rigel. This is also a super giant star nearing the end of its life but not predicted to become a super nova. It’s blue-white colour contrasts beautifully with the orange hue of Betelgeuse.

Rising several hours after Orion the brightest star in the night sky appears in the east. Sirius, the dog star in the constellation Canopus, never reaches very high from the UK, but is unmistakable as it traverses the sky due south. It often twinkles and shimmers frantically as the atmosphere distorts its light. Not much bigger than our sun, its brightness is primarily due to its closeness to us.

Moving north above Orion is another classic winter constellation, Taurus the bull. Its main star is called Aldebaran, the eye of the bull. It’s also another giant with a deep orange colour and easy to find. Aldebaran sits next to a ‘V’ shaped open cluster of stars called the Hyades, which enhance the richness of this area of sky.

Staying in Taurus but heading further north above the Hyades is the iconic Pleiades star cluster otherwise known as the ‘Seven Sisters’. It appears as a tight grouping of stars of which good eyesight can resolve seven of the 200 or so stars contained within.

Heading north and west we come to the Great Square of Pegasus. The constellation of Pegasus covers a large area of sky and is overhead by mid November at 9pm. The four stars, which make up the square aren’t very bright, but it’s easy to locate as it stands out due to the lack of stars in this region.

Joining onto Pegasus to its north east is Andromeda. In fact the top left corner star, Alpheratz, in the square is also shared with this constellation. Andromeda is not very distinctive but under dark skies and within its boundaries lies the furthest object you can see with the naked eye at 2 million light years away, it’s also the only object your eyes can see that’s not in our galaxy!

In contrast to the last two the constellation of Cassiopeia does stand out in a stunning ‘W’ or ‘M’ shape depending on its orientation when you find it. Anyone would notice this even if they’ve never looked up at the stars before!

In late autumn/winter it is overhead in the northern hemisphere and resides in a rich portion of the milky full of star clusters and nebula. Low power binoculars reveal a bounty of stars beyond the limits of your naked eye. Just south of Cassiopeia into the constellation of Perseus lies the beautiful binocular double star cluster. It’s been know for thousands of years as to the eye it appears as distinct fuzzy patch. Over time they’re likely to become easier to resolve as they’re both travelling towards our solar system at 15miles/second!

At 7,000 light years away though I think we’ll be long gone before they reach us!

Heading south of Perseus to Auriga, in the east in our journey around the autumnal and early winter skies, you’ll easily notice our sixth brightest star called Capella. Being circumpolar it never sets from the UK’s latitude. Over the summer it resides very low down in the north, barely noticeable. However from now it starts to climb high up in our winter skies until reaching overhead, where it can be found for many months after dark. An interesting fact is that its light belongs to four stars so close together we cannot resolve them with earth bound telescopes. Like the other giant bright stars described they’re all stars close to the end of their lives.

Finally, we come to the end of this celestial tour, travelling further east of Auriga towards due North where we find perhaps the most recognisable constellation in the northern hemisphere; Ursa Major also known as the Plough and Great Bear. Look due north wherever you are, but you’ll need an un-obscured view of the horizon where you’ll find it residing low down inconspicuously until the early spring. In the meantime it makes way for the winter night sky full of new stars and constellations to discover.