Meteor showers are named after the constellation in the patch of sky that they appear to radiate from. If you draw a line back from where you see them they will all appear to originate from the same point, called the radiant. Observing and trying to catch a glimpse of a shooting star requires no special equipment but it is very much a hit and miss affair. They can appear anywhere at anytime. It simply requires lying down comfortably looking up at a large view of sky away from city lights, with patience and just a pair of alert eyes. Perhaps the simplest form of stargazing but the most rewarding! 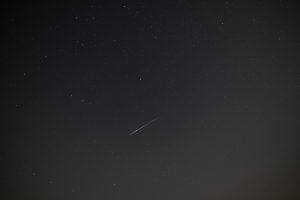 As the name implies these meteors radiate from the constellation Orion, which is only just rising due east after midnight at this time of year. The source of this shower is Halley’s Comet, the most famous comets of all. The peak date refers to the time when you’ll see the greatest rate of meteors in any a given hour. Typically expect to see around 20 shooting stars per hour.  But this shower like all the rest produces meteors either side of these dates for several weeks but at a much lower rates.

The Leonids originate from a comet called Temple-Tuttle, emerging from the constellation of Leo. Every 33 years the Earth passes through the densest part of this comets debris, shed in its orbit around the sun. Historically it has produced some the best displays ever.

In 1966 it became a meteor storm as it produced 1,000 meteors per hour. That’s 16 per second! Imagine that many, like a real celestial firework display. They’re also known for producing bigger brighter shooting stars as they originate from larger particles of cometary material. You never know with this shower if it’s going to produce a good display from year to year. Typically though it produces 15 shooting stars per hour on average.

Appearing from the constellation Gemini the Geminids are perhaps one of the best meteor showers of the year, producing up to 120 meteors per hour! Not only that but they produce slower bright shooting stars and sometimes fireballs, which are much larger and more dramatic than usual. This is certainly the more rewarding shower to watch.